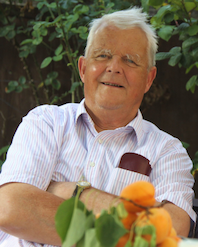 It is with great sadness, but deep gratitude for his life and gifts, that Bruce Kent’s family announce his death, on 8 June after a short illness. He would have been 93 on 22 June.

After national service in the Royal Tank Regiment and a law degree at Brasenose College, Oxford, Bruce Kent was ordained a Catholic priest for the Diocese of Westminster. Between 1958 and 1987 he served in several London parishes, as secretary to Cardinal Heenan, and as the RC Chaplain to the University of London.

It was his Christian faith that brought him to reject nuclear weapons as fundamentally immoral because, even without their use, nuclear deterrence itself depends on a willingness to commit mass murder.

As a leading spokesperson for the Campaign for Nuclear Disarmament in the 1980s, Kent became well known as a formidable opponent of Margaret Thatcher’s defence policy at a time when public opposition to the acquisition of Trident, and Cruise missiles, was escalating.

With his warmth and wit, Bruce Kent was a popular speaker with audiences of all ages from primary schools to pensioners’ groups. His commitment to innumerable peace and human rights campaigns over many decades included the Campaign Against the Arms Trade, for the reform of the United Nations, and the UN Treaty on the Prohibition of Nuclear Weapons (which came into force in 2021). He was always actively concerned about the welfare of prisoners, especially those maintaining their innocence, and prison reform.

Among his heroes was Franz Jägerstätter, the Austrian farmer who was executed in 1943 for refusing to fight in Hitler’s army. As recently as 15 May, Bruce Kent took part in the annual ceremony in Tavistock Square, London, to honour conscientious objectors throughout the world.

He was an Honorary Fellow of Brasenose College, and in the past year was awarded the Archbishop of Canterbury’s Lambeth Cross for Ecumenism.

Bruce Kent is survived by his wife, Valerie Flessati, his sister Rosemary Meakins, sister-in-law Ruth Kent, and their extensive families.

Baroness Helena Kennedy QC said: “I have known Bruce Kent since my student days in the early seventies when he was Catholic Chaplain to London University. He was a huge influence on my life and his commitment to peace and human rights was inspirational. He wanted a more compassionate and inclusive Church and a more decent and just society. He lived out his faith in everything he did – for the marginalised and the poor – and he gave his all with such a great sense of fun. He was one of the finest human beings I have ever met.”

Malcolm McMahon op, Archbishop of Liverpool, and President of Pax Christi England & Wales said: “Peacemakers across the world will saddened to hear of the death of Bruce Kent who made a lasting contribution to the peace movement within the Christian churches and much farther afield. Bruce became well known and influential in his national role in the Campaign for Nuclear Disarmament and with Pax Christi, the international Catholic Peace Movement. His clarity of thought and deep Christian faith brought light and direction to many people wrestling with the complex arguments around war and peace. Personally, I’ll miss him for being a wonderfully warm human being. May he now rest in the Peace of Christ to which he dedicated his life.”

Paul Rogers, Emeritus Professor of Peace Studies at the University of Bradford, and President of the Movement for the Abolition of War gave the following tribute: “For more than fifty years Bruce was an utterly determined advocate for peace, and a relentless campaigner against the idiocy of nuclear weapons. He never let up and was forever optimistic and inspiring, even at the most difficult of times.”

Reiner Braun, Executive Director of the International Peace Bureau said: “It is seldom we call someone a ‘peace hero’ because, as peace activists we are generally against such terms. But Bruce was one of these historical peace figures with his deep, lifelong, emotional and argumentative engagement for peace. We are doing everything to continue the work in his spirit.”

Kate Hudson, General Secretary of the Campaign for Nuclear Disarmament: “Bruce Kent transformed the scope and confidence of the anti-nuclear movement beyond all recognition. His leadership of CND in the 1980s was the embodiment of integrity, creativity and sheer determination. Bruce’s razor-sharp intellect, together with his humour, tireless work, intolerance of flannel, and total commitment to his faith and principles, made him a leader of our movement beyond compare. He will be much missed.”

Bruce, together with his wife, Valerie, was a stalwart activist for Justice & Peace in the Diocese of Westminster, attending many events locally as well as nationally and giving encouragement to many other Catholics. He will be sorely missed – Colette Joyce

My Tweets
Join 1,364 other followers

Event moved online owing to rail strikes! Find us on Eventbrite to register
All are welcome to come along to this Mass to mark the beginning of the Season of Creation 2022. Join us!