I spent this weekend in Calais and Dunkirk for a ‘People Not Walls’ meeting.   ‘People Not Walls’ – a working title – consists of several charities/associations and NGOs on both sides of the Channel who meet regularly to strengthen our solidarity for the  humanitarian treatment of migrants on our borders*.   Organisations  based in France, such as Help Refugees, l’Auberge des Migrants, Utopia 56 and Calais Catholic Worker, the Diocese of Europe,  meet with some in England, such as Justice and Peace, the Diocese of Canterbury, Samphire, Seeking Sanctuary and others. 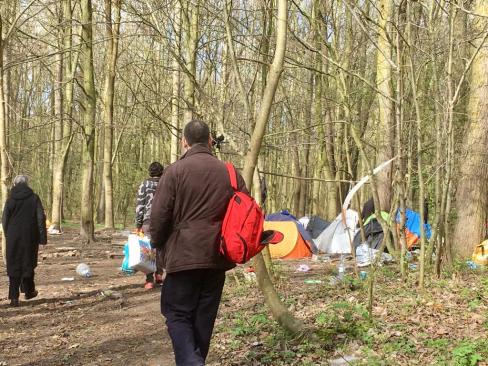 The Afghan camp outside Dunkirk.

We seek to show our respective governments that investing in barriers is a futile way to build human flourishing.  Instead we call for investment in the welfare of the hundreds, if not thousands, who continue to congregate along the coast, from the Belgian border to Calais and beyond.   The monthly meeting took place this weekend (late March) at Secours Catholique in Calais, with 10 or 12 people who are getting to know each other and building a programme of action.

Our Calais friends were downhearted and even traumatised by the recent violence of the riot police (CRS), who had demolished a small settlement on the outskirts of Calais.  Each time this happens, tents, sleeping bags and clothing are destroyed.   They nevertheless hold out some hope that new avenues of collaboration can change the situation.

We are planning this on 3 levels, exchange of information; a joint symbolic action on both sides of the Channel on June 20th, World Refugee Day; and a collaborative campaign for greater humanity from both our governments.  All these objectives are in progress, aided by some semi-professional lobbyists, as well as volunteers, all with determination to seek better for the hundreds forced to ‘drift’ around the coastline.  For most ‘exilés’ there is now no alternative but to attempt some illegal entry to the UK.

Two of us had booked to stay over till Sunday and travel northwards to Dunkirk.  A quiet farm B&B near the coast seemed far from the struggles of the Calais streets, but we reached Grande Synthe on the outskirts of Dunkirk early next morning.  Here, Sylviane, a volunteer friend, met and led us to a nature reserve where we discovered a group of 20 plus Afghans camping in the woods, safe, they said, from police disturbance.  One was known to my friend who had seen him in Calais two years before.  Others had spent time in Italy before coming North.  Pallets kept the men from the worst of the mud, and there was a substantial camp fire. We were offered a cup of tea – I remembered Afghan hospitality from the Calais Jungle – but we had other visits to make.

On to the municipal gymnasium where open ground and surrounding sports pitches have been made available for camping.  We saw perhaps a hundred tents of varying sizes and 200-300 people, mostly men, enjoying the comparative warmth of the morning sun.  With goods from our friend such as sleeping bags, tents and warm jackets, we were temporarily popular, till these ran out, and the men returned to their serious occupation of getting phones recharged on multiple socket cables.  A favourite criticism of migrants is of course that they can afford smart phones.  But it is a lifeline for most, not only to keep them in touch with family – generally with free Whatsapp, but also it tells them where the lorries are, the traffic flow, and so on. Perhaps also family can transmit money via phone.  A few children, one Iranian with excellent English after only 8 months in Europe.

Phones are important here at the gymnasium camp in Dunkirk!

This 7 year old Iranian was a brilliant English translator

Sylviane then drove us to a municipal children’s holiday centre where women and children are housed, a lovely sheltered modern house in its own grounds.  Alas, both the gym and the holiday house will be needed in the warmer weather and the migrants will be out on illegal ground again.

By lunchtime Sylviane decided we needed feeding and took us to an amazing Vietnamese ‘eat all you want for a fixed price’ meal, where we did just that, without much encouragement.  Then we continued on to her  house on a street by the sea in town, where she proudly pointed out where the blockbuster ‘Dunkirk’ had been filmed. Her house, of old 19th century architecture, had been part of the film  set, close to where sandbags had blocked the way.

Walking along the beach we were treated to enormous icecreams and a visit to an old German bunker on the beach, which a local artist has just completely covered with fragments of mirror, calling it ‘Reflections’.   Modern barbed wire fences in Calais, old German war bunkers in Dunkirk:  you do indeed have to reflect on this stretch of the French coast!   Who is protecting whom from what?

My reflections were mostly, however, on the resilience of the migrants, and the support needed by volunteers and aid workers for the long haul in seeking justice on the borders, and that  the money spent on walls would be much better spent on food, clothing and shelter for migrants.

*The political border between the UK and France is on the French coast, rather than mid-way across the sea;  border security, therefore, while geographically on French land, is financed greatly by the UK.   The hundreds of migrants, having entered Europe through Greece, Italy or even Northern Europe,  and crossed several Schengen borders, are brought up short when arriving on the North coast of France, facing a daunting barrier of steel, barbed wire, and 25 miles or so of freezing English Channel.